Have you ever wondered how CBD works? Here is your guide

As of today, there are over 100 million Americans under some level of quarantine due to the recent outbreak of the Novel Coronavirus (COVID-19).

With no end in sight it is important to make sure we take care of ourselves and our mental health while we do our best to "flatten the curve." With heightened anxiety and stress in our daily lives now, we must find ways to relax in the comfort of our homes. One of the best new tools in the FindKarma arsenal is CBD.

What is CBD? How Can It Help Improve My Mental and Physical Health?

Over the last decade there have been significant discoveries concerning the cannabis plant and its medical uses.

Researchers have found over 100 compounds in Cannabis. One of them is called Cannabidiol, better known as CBD, which can provide powerful pain relief without the associated high of marijuana.

CBD can be extracted from both the cannabis plant and the hemp plant. If it is hemp derived it can be sold in states where medical marijuana is not legal. The law requires that the hemp and final products not contain more than 0.3% THC. Currently there are 48 states with some form of legalization (CBD, medical marijuana or recreational marijuana).

Today, it is used to treat many different types of ailments from back pain to seizures and has improved the quality of life of many sick people across the country.

Below we cover the different forms of CBD available and how they can be beneficial for you!

Types of CBD On the Market: 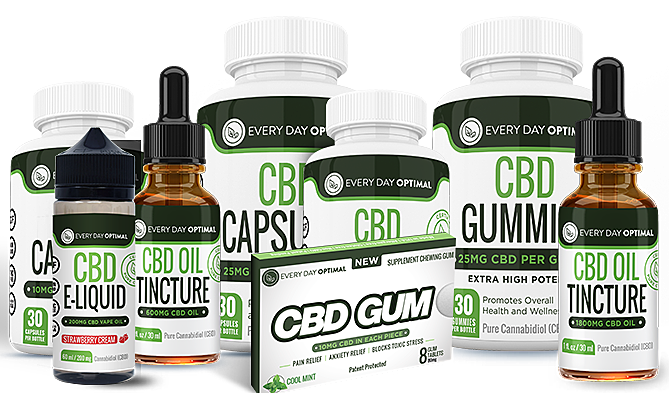 How Does CBD Work?

Like its THC counterpart, CBD must attach itself to a cannabinoid receptor in the body in order to work.

There are two different cannabinoid receptors in the human body, CB1 and CB2.

CB1 receptors are associated with many important processes like pain, memories, movement, mood and even thinking! While there are CB1 receptors in various parts of the body the majority of them are found in the brain.

When you use marijuana, the active ingredient THC works by attaching itself to the CB1 receptors.

CB2 receptors are associated with pain as well as inflammation. 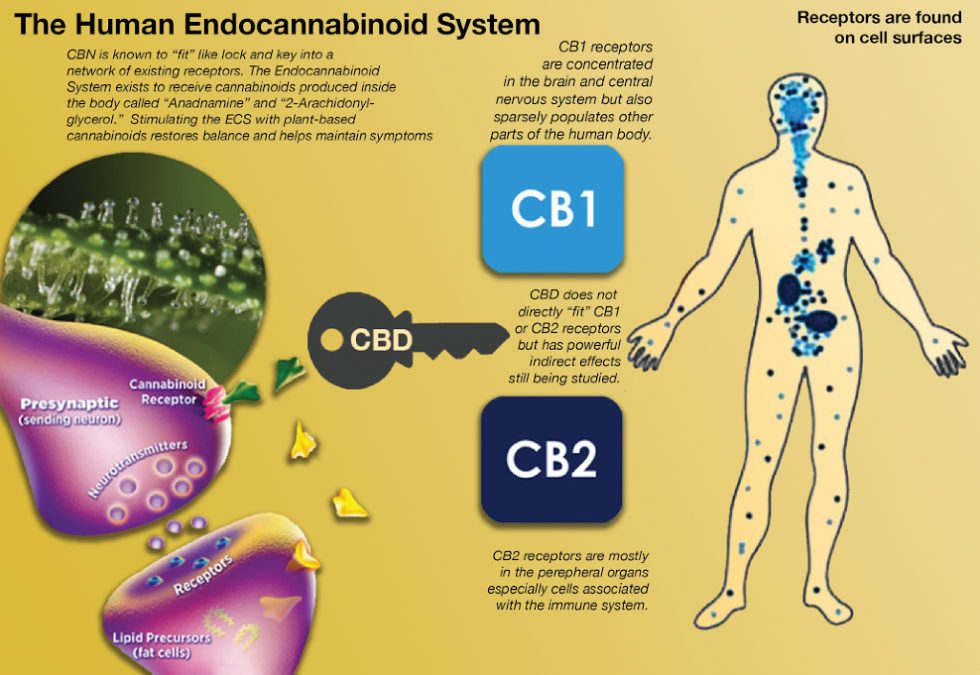 After much research, it was determined that CBD doesn't directly impact the receptors but causes the body to use its own naturally occurring cannabinoids more effectively.

Benefits of CBD On the Body

Now that we have discussed how CBD actually works, lets look at some of the ailments people have been treating with this new healthy alternative.

Anxiety: millions of Americans suffer from and deal with anxiety in their everyday lives. It can be overwhelming and in extreme cases can cause people to change the way they live. Some of the different types of anxiety disorders include PTSD, panic disorder, and generalized anxiety disorder. Unfortunately, most of the medications used to treat anxiety like benzodiazepines can be extremely addictive and produce nasty side effects. CBD makes a great alternative because it is not physically addicting and does not produce a high.

While it is important to avoid THC if you suffer from anxiety or are prone to panic attacks, users have found CBD to alleviate sudden onset of symptoms.

Cancer: cannabis has been used to treat the negative effects of cancer treatment like nausea, loss of appetite, and insomnia for decades. However, CBD has been getting a lot of attention due to its lack of psychoactive properties and growing list of uses.

According to cancer.org, "scientists reported that THC and other cannabinoids such as CBD slow growth and/or cause death in certain types of cancer cells..."

Hopefully, now that the laws are starting to change regarding cannabis, more treatments will be discovered and used to help patients in need.

Epilepsy: CBD is being studied as a treatment for epilepsy because of its ability to prevent seizures. Research has also led scientists to believe that CBD can be effective in reducing a number of possible disorders resulting from the epilepsy, such as neuronal injury and neurodegeneration.

"Charlotte's Web" - One of the most famous cases of treating epileptic seizures with CBD came in 2010 in Colorado. Known as the girl who "changed medical marijuana laws across the country," Charlotte Figi was only five years old when she was first introduced to CBD. Diagnosed with a severe form of epilepsy called Dravet's Syndrome, Charlotte was suffering from over 300 seizures per week. Her parents decided to take a big risk and give Charlotte CBD tincture during one of her seizures. The CBD stopped it almost immediately. By 2014, four states including Florida, New Jersey, Colorado, and Utah had passed laws allowing cannabis-based tinctures to treat epileptic seizures.

CBD is a wonderful tool that can help you relax after a long day, relieve stress if you are feeling anxious, or simply keep your sanity during a lengthy stay at home.

Look out for "Best CBD Brands of 2020" coming soon to FindKarma!

To help find the best CBD products for you, here are the 5 best CBD balms of 2021 that are affordable as well as high quality.

CBD balms are the hottest thing on the market during this pandemic.

Often thick and waxy, CBD balms are an excellent source of pain relief. They help maintain skin health, as well as manage joint pain and other annoying ailments. Whether it be pain with your jaw, or arthritis symptoms, CBD balms have become a go-to source of relief for millions.

However, like many CBD products flooding today's market, you get what you pay for. Cheaply made CBD products are everywhere and hard to recognize for those new to the CBD market. To help find the best CBD products for you, here are the 5 best CBD balms of 2021 that are affordable as well as high quality.

Lazarus Naturals out of Central Oregon offer some of the best CBD products to date, and their soothing balm is no different. The company's Soothing Mint Balm offers a refreshing peppermint scent and a high-quality mix of ingredients from mango butter to beeswax. The balms are then infused with CBD hemp extract through what the company calls "a vertically integrated process." The CBD used is "full-spectrum" meaning that it encompasses all of the hemp plants cannabinoids including a tiny bit of THC. Not to mention the company offers 60 percent off to veterans.

Another full-spectrum CBD offering, Papa & Barkley's Releaf CBD Balm is made from beeswax, essential oils and extracts from tea tree, eucalyptus lavender, and peppermint. It's an absolute sensation to put on, as warmth will flow through the pained area followed by a cooling sensation. It's an expertly made balm that's perfect for anyone on a budget as well.

Made from a concoction of wintergreen, peppermint, and camphor oil, CBDfx Muscle Balm is specifically meant to target sore muscles, as advertised. It's not quite full spectrum like the others, but is broad-spectrum and encompasses a lot of the hemp plant into its CBD mixture.

Non-GMO, gluten-free, and comprised of beeswax and almond oil. The PlusCBD Oil Hemp Balm also includes peppermint extract and vitamin E. It's softer than the other balms on this list and helps especially soothe dry skin, which is obviously a big issue in the winter. Fused with cannabinoids, terpenes, and fatty acids to help moisturize and beautify dry skin, PlusCBD Oil Hemp Balm is an affordable and high-quality, full-spectrum CBD product

While a little on the pricier side, Lord Jones CBD formula is a perfect CBD balm for bedtime. Crafted with organic shea butter, extra virgin olive oil, and jojoba oil, the balm is devoid of THC, and is meant to create a feeling of calm as you crawl into bed. Devoid of synthetic dyes, sulfates, parabens, phthalates, formaldehyde, and propylene glycol, Lord Jones offers a high caliber CBD balm that is sure to satisfy.

Related Articles Around the Web
Trending

The photographer sat down with Popdust for an exclusive interview

Created as early as the 15th century, Tarot Cards have long been a source of spiritual guidance for those willing to dissect their purposefully obscure meanings.

For the uninitiated, attempting to understand Tarot Cards is a monumental undertaking. Each deck's characters, actions, and stories are purposefully opaque and are often best interpreted by an esoteric reader who has spent a lot of time studying a deck. Even then, there remain a handful of different readers that prioritize these interpretations based on empathy, intuition, or sometimes "psychic ability."

Tarot Card's obscurity itself has obviously invited a host of skepticism; but criticism aside, the cards themselves are artistically gorgeous. They're multilayered and spritely, each character layered in waves of vibrant color that each take a few moments to visually comprehend. But just like the plethora of styles and meanings behind Tarot Cards, no two decks ever look the same.

An Open Letter to the Aliens: Please Help Us

Check Out Our Top 5 Best CBD Gifts For Valentine's Day!